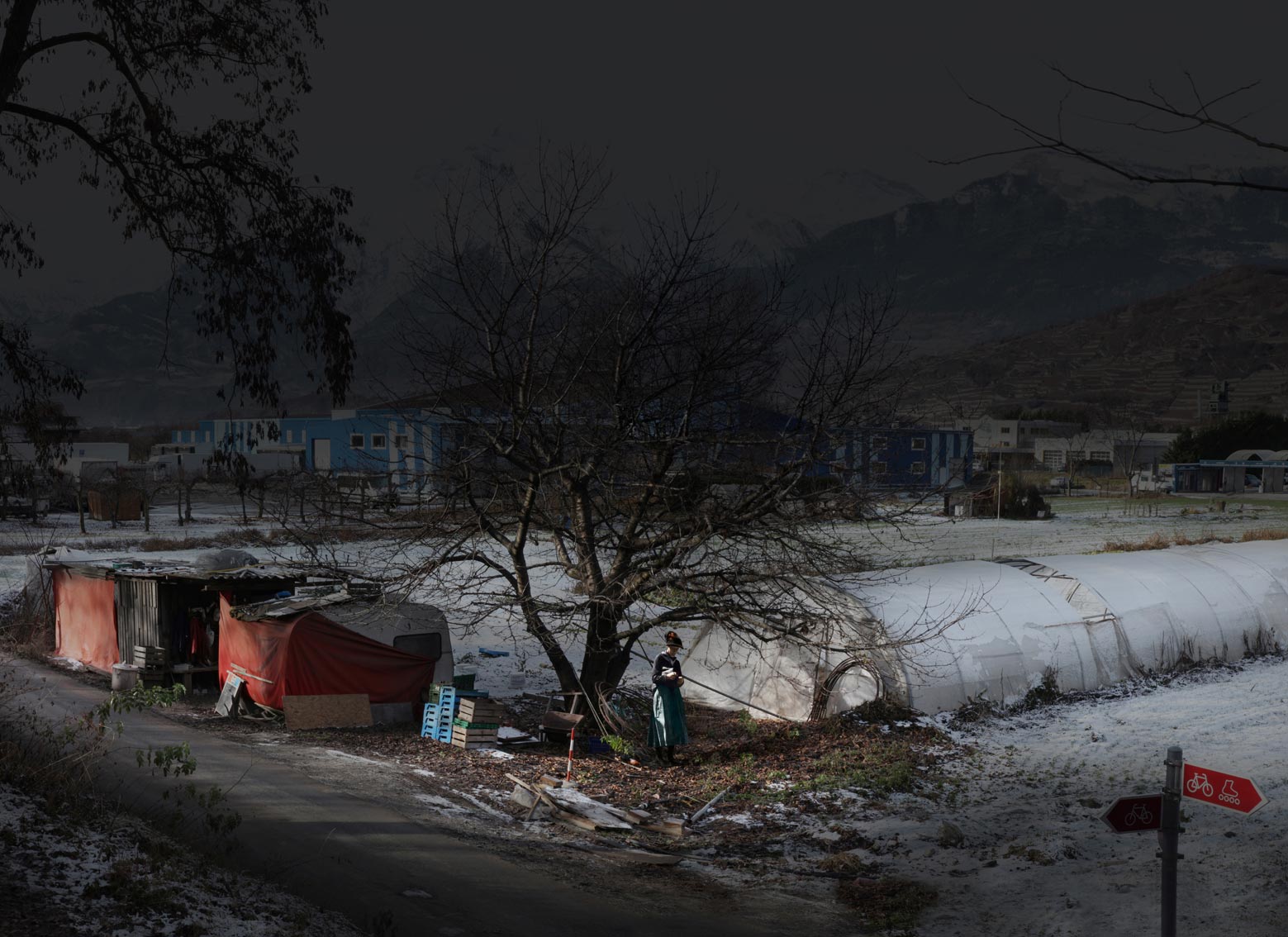 Somewhere in Switzerland there’s a municipal archive, the collective memory of a town, with negatives and newspapers and postcards and photographs that tell the story of the area from 1880–1940. It’s the collective paper memory of the place, including a picture of four children who might not have grown into respected elders, a picture of a priest who may have performed important rituals in the town, a picture of a young woman whose face you might recognize—if the town’s memories are your own.

On the other hand, for photographer Nicolas Dhervillers, who spent only six months residing in Sion, the people in those images were more like characters in a play he would write. Acting the parts to which the photographer assigned them, they appear throughout a series called My Sentimental Archives which will be exhibited at Galérie Bacqueville in Lille, France through Nov. 20. In a meditation on appropriation, each photograph is a two-in-one. Dhervillers’ landscape photography from the area was subjected to a digital process adapted from the cinematic “day for night” technique, lending an eerie look to pictures taken in broad daylight; the archival figures are placed within those landscapes and washed with the unnatural digital light.

“It was very important to find a technique that gives an impression of being ‘outside time,’” Dhervillers told TIME in an email. “Thus, it’s not about a simple photograph but rather a photograph that mixes different mediums that I particularly like: theater for the positions and attitudes of the characters, movies for the light, photography for the idea of controlling the framework, painting for the final rendering.”

Each figure from the archives—small, dusty, black and white people—has been carefully restored by Dhervillers. And, in the process of restoration, the photographer says he felt that the images raised a spiritual question: can we create a present, a now, out of the scraps of the past? “The appropriation of the collective memory, of photographic memory, overlaps with the desire to question a picture in a larger sense,” he said. “This series takes us into a fictional space outside of time, through the photographic processing.”

Dhervillers has worked with appropriated figures before; his series Tourists uses images taken from the internet. But in this case, in the end, his questions about photographic appropriation took on another dimension: the archives from which Dhervillers took the figures did, in a way, become “his.” Even if he didn’t share the town’s history, he felt he knew its inhabitants well. “I spent a lot of time with these little characters,” he said. “I raised them, I colorized them, I gave them life.”